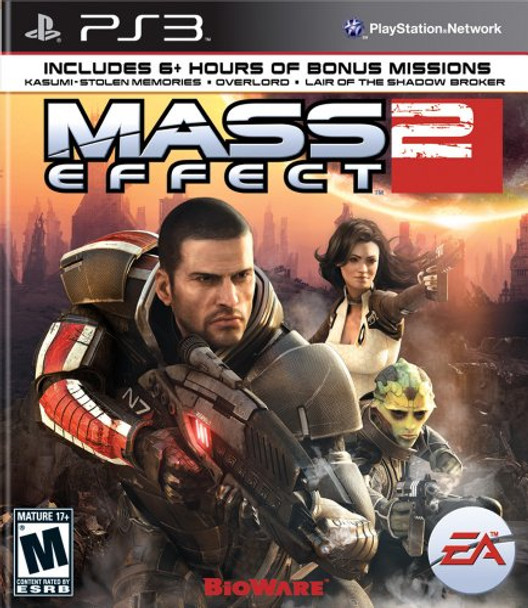 The award winning makers of Star Wars(R): Knights of the Old Republic, Dragon Age: Origins, and Mass Effect are bringing the Mass Effect franchise to Playstation(R) 3! Enhanced for Blu-ray with stunning visuals, bonus content and additional features! Two years after Commander Shepard repelled invading Reapers bent on the destruction of all organic life, a mysterious new enemy has emerged. On the fringes of known space, entire human colonies are vanishing. As Commander Shepard, you must assemble the galaxy's deadliest team and stop the most terrifying threat humanity has ever faced. Even then, they call it a suicide mission. Prove them wrong and save mankind. Intense Third Person Combat Take cover, command an elite squad, utilize over 20 weapons including new heavy weapons, and unleash deadly powers against your foes with an all new and improved combat syste Increased intensity with precision shooter controls deliver gripping action as you overcome insurmountable odds. Featuring a new location based damage system: target key weak points, and blast off limbs, ignite enemies, or cripple and disable enemy troops. An Entire Galaxy to Explore Travel the distant, deadly reaches of space to assemble your team to save mankind. A cast of amazing and diverse characters await discovery on a variety of dangerous, visually stunning worlds. Explore an entire galaxy of unique planets and embark on side missions to uncover more secrets in the Mass Effect universe. Robust Character Customization Create your version of Commander Shepard, customize your appearance, and tailor your own abilities and strengths. As you progress, so do Shepard's abilities. Control the conversation. Improved conversation system where you can take matters into your own hands - often with the liberal application of force.