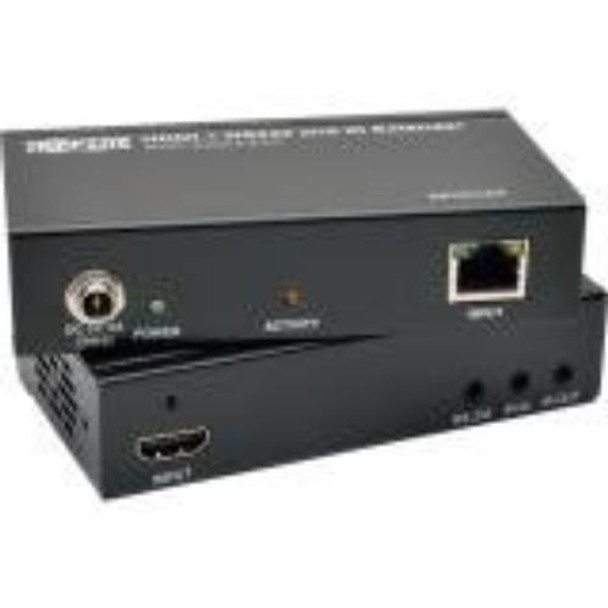 Tripp Lite's BHDBT-K-SI-ER implements HDBaseT technology to transmit HDMI audio and video, RS-232 Serial, and IR Remote Control signals up to 500-ft. (150M) over a single Cat5e/6/6a cable, displaying HD video resolutions up to 1920 x 1080 (1080p) @ 60Hz. You can further expand the range and number of monitors in your installation by adding BHDBT-TR-SI-ER transceivers in between the transmitter and receiver units. The BHDBT-TR-SI-ER features a HDMI port for the connection of a monitor, and can be located 500-ft. (150M) from the transmitter unit. The receiver unit can then be located the same distance from the transceiver, allowing you to double the total extension distance. Up to 5 transceiver units can be inserted in between the transmitter and receiver, allowing for an overall extension distance of up to 3,000-ft. (900M), with a monitor located at each point in the chain.

In addition to transmitting HDMI audio and video, the BHDBT-K-SI-ER features 2-way IR Remote Control, allowing you to control your Blu-Ray player using its remote control when at the remote display, or to control your remote display using its remote control when at the Blu-Ray player. (IR Frequency @ 39Khz) RS-232 Serial is also transmitted, with support for baud rates up to 115kbps, allowing you to control serial devices such as touchscreens or scanners.

The transmitter and receiver feature locking HDMI ports, for use with Tripp Lite's series of High Speed HDMI cables with Locking connectors (e.g. P569-006-LOCK). These cables lock into the ports on the transmitter and receiver units, preventing them from accidentally being loosened or disconnected, and ensuring that your signal remains intact, The BHDBT-K-SI-ER supports 7.1 channel surround sound, DTS-HD, and Dolby TrueHD audio, as well as 3D video, EDID, and HDCP. Mounting hardware is included that allows each unit to be wall mounted, rack mounted, or pole mounted. Compliant with the Federal Trade Agreements Act (TAA) for GSA Schedule purchases.