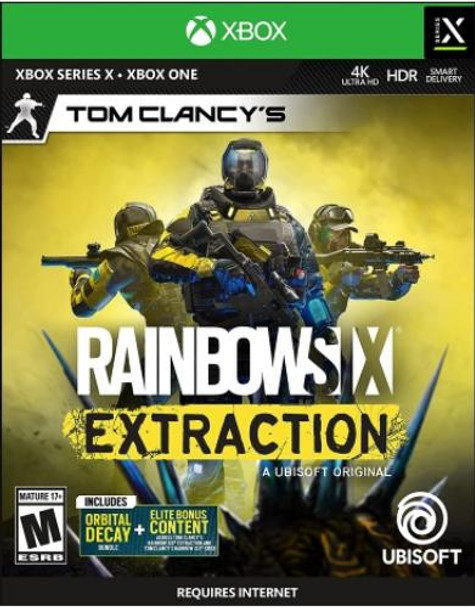 The elite operators of Rainbow Six are now united to face a common enemy: a highly lethal threat known as the Archeans. Assemble your team and risk everything in tense incursions in the containment zone. Knowledge, cooperation, and a tactical approach are your best weapons. Band together and put everything on the line as you take on this unknown enemy. Rainbow six extraction is a 1- to 3-player co-op tactical FPS. Supports cross-play & cross-progression across all platforms. Bonus: own Tom Clancy's Rainbow six siege and Tom Clancy's Rainbow six extraction to unlock the United front cosmetic bundle in both games + unlock 18 extraction operators in Rainbow six siege. Pre-order now for the bonus pack: Orbital Decay Bundle! Upgrade to the Xbox Series X-S version of the game at no additional cost. CONDITIONS AND RESTRICTIONS APPLY. This game leverages Smart Delivery allowing access to both the Xbox One title and the Xbox Series X-S title. To upgrade eligible physical disc copies, a console with a disc drive is required. Visit ubi.li/NextGenUpgrades for details.